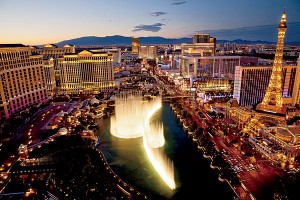 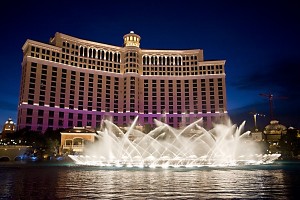 Las Vegas is in the south of Nevada, in the middle of the Mojave Desert. More than 39 million people visit Las Vegas each year. So Las Vegas is the most visited city in the United States.

Most of the hotels, casinos and attractions are in two streets: Las Vegas Boulevard South (called the Strip) and Fremont Street.

The famous Las Vegas Strip is a stretch of 6.5 kilometers apartiene als Las Vegas Boulevard South, in the south of the Stratosphere tower. Here are eight of the dies largest in the world.

Las Vegas is the entertainment capital of the world! The best shows in the world meet here. Cirque du Soleil is presenting now 6 shows like “O”, KÀ by Cirque du Soleil , Michael Jackson One, Mystère, The Beatles Love and Zarkana. David Copperfield has an amazing show at the MGM Grand, Seinfield has arrived to the Ceasar’s Palace, Criss Angel at the Luxor are just a small sample of the hundreds of events of Las Vegas. What are you waiting for to visit Las Vegas?.

Majestic world-class hotels, the best shows in the world, international haute cuisine and shopping surround the lavish Las Vegas Strip, strip and heart of the exciting city of Las Vegas. Browse properties it is like entering an alternate world where distant countries to visit or meet its luxury contemporary styles, each offering a different experience. The strip also has unrivaled attractions such as the spectacular volcano that erupts every night; the impressive fountains that dance to famous songs and rise up to several meters high; a bay where a daily battle between pirates and sensual sirens pound; Venetian gondolas and more.

Book now the hotel of your dreams in Las Vegas! 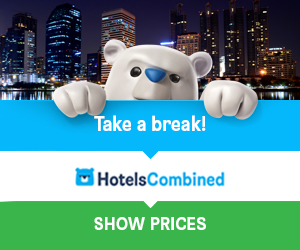